Burning Man is Over

Burning man is over… and I’m already looking forward to the next years burn.  It’s been a while since I have written, so this is going to be a long but good one…  I’m going to tell a story of what it’s like to take a major art car to the burn and live, well sort of. 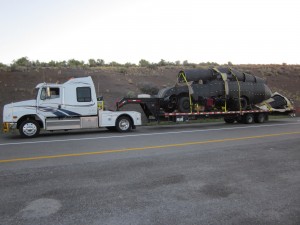 Here is what the scorpion looks like packed up and on the road.  I hired some homeless guys from the shelter to help load the monster along with Garrett Booher and Jeremy Smith, who are not homeless.  It took a couple different tries to get the 8 legs and massive arm segments packed and organized inside the truck bed but we finally figured it out.  I didn’t leave SLC until 2 in the morning and drove until about 4 – all of this is after working 16 hrs, uhh. But at least I didn’t get stopped for never having driven a big rig before and not having a commercial drivers license.

The rest of the drive to the Burn I got a ton of attention from the truckers mostly- which made me laugh. The burners who passed didn’t even notice. I pulled into the gates Friday evening pre-burn around 8 pm.   The Mantis was pretty much completely assembled by the time I pulled in thanks to; Coulson Rich, Spencer Barton, Mike Muldoon, Chris Marcinkowski and my wife Kristen Ulmer who had arrived a day earlier.

We unloaded everything from the Scorp that evening, here is a video of unloading the scorpion. This one is the only long one I’ve posted.
scorpion unload video

Every time we unload from the trailer we have clearance issues with the air dryer.  For some reason we go all retarded and can’t remember to remove it BEFORE we unload and the results are almost devastating every time  I guess this is what happens when you work over 400 hrs in one month.  This time the ramps sunk into the playa and reduced our clearance even more.  We did eventually get it off with minimal damage.

The next day, Saturday, we spent the entire day attaching legs, stereo and installing bench seats. We thought we were home free, boy was that premature. 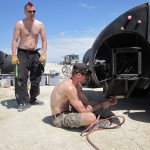 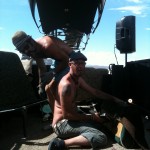 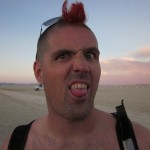 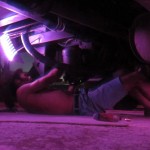 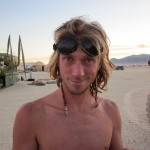 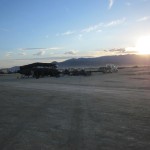 It’s now Saturday night and we’re ready to lift the tail.  We already raised the tail and tested it out in SLC so this shouldn’t be too difficult… riiiight?

Burning Man’s Department of Public Works has a team of Heavy Machinery equipment and operators.  DPW Heavy Machinery has fork lifts, man lifts and cranes, everything you can imagine that is needed to put together large structures at BM.

We setup the scorp in front of the VR and raised the tail with no real problems.  As you can see in the video we weren’t doing a very good job of keeping the straps straight above the tail, this would come back to spank us in a few minutes.  Scorpion Tail Being Raised

The tail was within two inches of being all the way raised when Spencer noticed that a propane hose was being severely pinched. Somehow in all the confusion of leaving camp somebody rerouted the hose in a place it wasn’t supposed to be and as a result the tail was about to sever the hose.  We would have lost our flame effects if Spencer hadn’t caught it in time. What happened next still makes me cringe though.

As we were lowing the tail to reroute the hose, the VR was pulling instead of only lifting and Coulson opened one of the tail hydraulic ram valves at the same time to straighten the tail. The two simultaneous actions led to the tail being dynamically loaded, “bounced”, which drove a hydraulic ram through the truss.

When the tail bounced, it bounced pretty hard, but it didn’t look like anything radical happened so we rerouted the propane hose and prepared to start lifting the tail back up.  Before we started lifting we activated the tail rams again to make sure everything was ok.  What we didn’t know was that the truss was shredded and that moving the ram was peeling the truss apart like a fat kid tearing open a snicker bar.

Talk about getting groin kicked!  We headed home to cry and shout, we were already so tired from the past month, and decided to assess the damage in the morning.  Here’s a video of what we found… Damaged Scorpion Tail Truss

Coulson and I spent 12 – 14 hrs a day for the next two days repairing the broken truss. The biggest challenge we had was finding a generator available and powerful enough to get some welding done, it’s BM and everybody is using their generators.  We had to keep using other people’s generators when they weren’t using them so Coulsen ended up welding at night with poor lighting, what a pain in the ass. 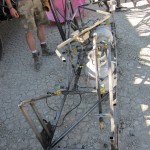 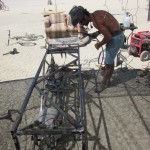 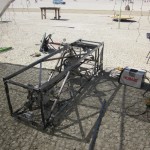 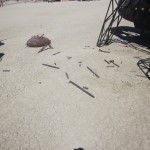 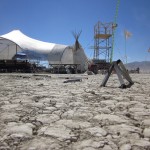 Luckily we stumbled upon our first playa angel Arlen Bodily who was part of the clock project.  Arlen had a 5000W generator that allowed us to get the welding done during the day.  One of the beautiful things about BM is that everybody is so open and willing to help.

Time ticked on. While we continued to work our sacs off, it’s now Wednesday of BM, the event is almost half over and the Scorp still isn’t up and running.  The client has been very understanding during all this craziness and I just so happen to have brought along my 40 ft Praying Mantis to keep him and his friends entertained while we’re fixing the Scorp.  Somehow they got away with playing dub on the Mantis which is strictly forbidden. Meanwhile I’m still stressing out like crazy trying to get this project done and finally hand it over so I can relax for the first time in 7 months since we started building her.

We spent all of Wednesday installing the truss back onto the tail, re-installing the skin and hooking up the fire system.  It’s now Wednesday evening and we’re ready to deploy the tail again.  By now I’ve become friends with the DPW and have a serious crane scheduled and top crane operator Gary Wilson, our second playa angel, we’re not messing around this time! If something happens this time we’re done for this burn… no pressure at all. 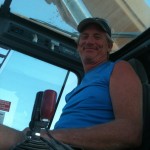 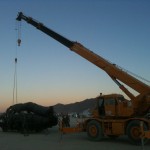 We did it, time to enjoy the burn.  Oh wait, we still have to attach the front arms and add lights to front arms for the first time, it just doesn’t end.  We finished up these final details and we’re off to an amazing burn.  Yea!  Here are a couple of pictures and videos of the scorp in action. 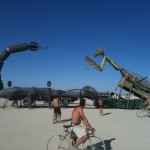 Oh my god, is the post ever going to end!

One more story.  I made it home safely with the Scorp but the Mantis wasn’t so lucky.  The Mantis is built on a 1983 GMC dump truck with a 8.2L Detroit Diesel motor that had only 56,000 miles. These motors are notorious for leaking oil which means that they frequently need oil added, just part of owning one of these things.  Something went wrong with Coulson’s trip on the way home and long story short we got the call and the Mantis motor is blown up.  Sad, sad (and %$#^ing angry), after an expensive 100 mile tow home looks like I already have my next very expensive and time consuming project lined up…

Good thing I’m a work-a-holic. Kind of a familiar feeling at this point.

Conclusion: When you’re putting on the show you don’t get to watch the show.  These big project kick your ass up, down and every other direction, but they sure made me feel like a bad ass! 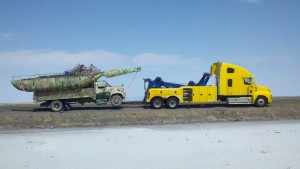